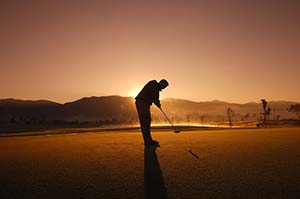 If you were to ‘Sweep The Sole’ of a III Wood across the grass from ‘Impact Fix’ (similar to Address Ready) to a point outside or to the brace side of your Brace Foot Heel, keeping it on the ground, that would be a ‘Flat or Horizontal Swing Plane’ … no vertical motion or movement. (see ‘Flat Angle Of Attack)

If you were to simply ‘Pick Up The Sole’ of that III Wood, straight up, back and onto your Brace Shoulder (to your Trapezius Muscle), allowing the Wrist Elbow & Shoulder to Bend as required, that would be a ‘Upright or Vertical Swing Plane’. (see ‘Steep Angle Of Attack’)

If you were to accomplish the same Back & Up Swing between the above two ‘Planes’, it would be called a ‘Neutral or Normal Swing Plane’. (see ‘Neutral Angle Of Attack’)

Ideally, if you accomplish a Flat Back & Up Swing, you will tend to also accomplish a Flat Down & Out or Front Swing’. Your Back Swing tends to be a Dress Rehearsal for your Front Swing. What you ‘Set-Up’ for each swing with the same golf club should usually repeat! (see ‘Confident, Comfortable & Consistent’)

Your ‘Spinal Column or Spinal Crankshaft’ should be very steady and predictable. (Chin & Chest Tallish – Covering The Ball) According to Hoyle, the ‘Swing Plane’ on which your ‘Lever Assemblies’ function shall also be consistent and repetitive! What does that also mean? Predictable ‘Ball Flight Performance’ and bigger smiles.